Luke founded WVS at the end of 2002 to help animals in some of the world’s toughest places.

With a focus on practical action, WVS coordinates teams of international vets to assist non profit organisations globally. From disaster emergency response, international veterinary training to community education programmes, WVS sends people, equipment and medicine to help animals who have no one else. 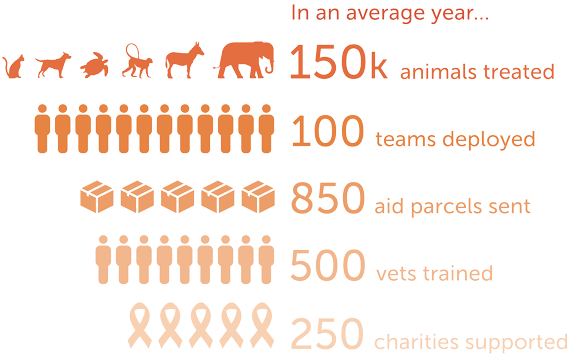 A child dies of rabies every nine minutes. Luke set up Mission Rabies in 2013 to change this.

Dogs are the reservoir of the disease (nearly all human cases of rabies are caused by dogs bites) and by eliminating rabies from dogs, prevents it being transmitted to humans (mainly children contract it). Killing dogs doesn’t work as all that happens is that new dogs move into an area within months of other dogs being culled. The answer is to vaccinate dogs - they keep outsider dogs away, protecting communities. Better for the dogs, better for the people. Animal welfare for Human welfare and vets are the cornerstone to making this happen.

With seven international project sites, the charity, thanks to amazing sponsorship from Dogs Trust and MSD Animal Health, has vaccinated over 500,000 dogs in the last 3 years in some of the worlds worst affected rabies hotspots.

Mission Rabies is in it’s third year of vaccinating all the street dogs in the Indian State of Goa (an area the size of Wales) where it has reduced the reduced the incidence of human rabies deaths by 98% in two years. It will be eliminated within 18months and the charity now has the endorsement and support of the Indian Government to see this through.

The Mission Rabies team targeted Blantyre in Malawi because the Government hospital annually recorded the highest incidence of rabies from any single institution in the whole of Africa. After vaccinating 35,000 dogs in 20 working days in 2015, repeating this in 2016 - the hospital now records zero child rabies deaths. We now need to extend the programme nationally.

Rabies kills at least one child every nine minutes. It's an agonising death and there is no treatment once a person shows symptoms of the disease. If…

85% of all new infectious disease are from livestock. Zoonotic disease (diseases people catch from animals) account for at least 60% of all known…

This one sounds a bit random but is super important. WVS sends out parcels containing medical donations, veterinary equipment, text books to non…

The ​WVS 'Care for Dogs' shelter in Chiang Mai, Thailand cares for abandoned, abused and injured dogs every day, every week and every year. These…